I WAS MADE FOR LOVING YOU NAAAAAAANOOOOOOO... 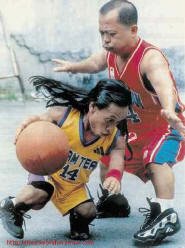 Robert W. Welkos of the Los Angeles Times is reporting that Joey Fatale, the 4-foot, 4-inch New Yorker who heads the all-dwarf KISS tribute band MINIKISS, is denying published reports that he tried to sneak past security last month at the Hard Rock Hotel and Casino in Las Vegas to confront a rival band leader, 4-foot "Little" Tim Loomis of TINY KISS, for allegedly ripping off his idea for such a group.

Loomis, a former drummer for MINIKISS, was performing with TINY KISS, which includes three little people and a 350-pound woman, on St. Patrick's Day at Beacher's Madhouse, a Las Vegas variety show, when the incident occurred.

Show host Jeff Beacher told The Times on Monday that Fatale "tried to sneak in saying he was TINY KISS" and had to be escorted from the premises. According to the New York Post, Fatale's lawyers sent a legal cease-and-desist letter to the show trying to shut down the act.

Loomis told the Post: "[Fatale] came out here [to Las Vegas] and tried to cause trouble, so I had him 86'd from the Hard Rock. The impression I got was that he was looking for a fight. He'd been threatening me over the phone."

But Fatale disputed the accusation, telling The Times: "This whole thing about me going to the Hard Rock with my gang — that didn't happen. What happened was, I went there because somebody told me [TINY KISS was] doing the show that night…. Nobody escorted me out of there. I went there by myself to approach them as a gentleman."

Fatale says he has "nothing to say" about Loomis, except, "He's a nice guy." And, he added, "This is all a big publicity act for the guy at Beacher's." 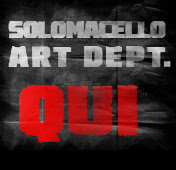